How to Rock Climb - The Beginners Guide to Climbing Gear, Lingo, and Rating Systems

Learning a new hobby can be extremely intimidating; especially an extreme sport like rock climbing. Walking into a rock climbing gym can be almost like stepping into a different country.

People are dressed a bit odd. It smells like a chalk factory. And weird phrases are being thrown around like "venga" or "nice mantle". And no, they aren't talking about a block stacking game or your grandma's fireplace.

With a few minutes spent learning what gear you need, how to climb safely, the rating system, and the proper slang to use you'll be a "climber" in no time.

This post will tell you everything you need to know to get started as a rock climber. But before we get started, a little inspiration from Chris Sharma.

(If you are reading this in an email or RSS, you can view the video here.)

There are very specific differences between mountaineering, canyoneering, rock climbing, and intense hiking. There are different rating systems and types of gear used for each. The key things that sets rock climbing and it's subcategories like bouldering and sport climbing apart are two-fold: Now that you know the basics about what rock climbing is, let's discuss the gear needed. 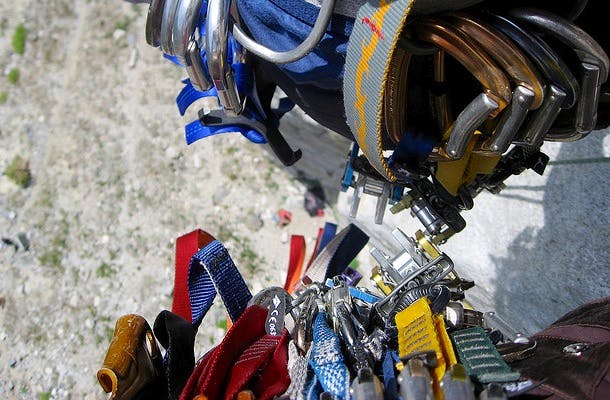 Unless you rent gear at a rock climbing gym, you'll need to pick up a few things before you go climbing. How much gear you need depends mainly on where you are (indoors or outdoors) and what kind of climbing you are doing (bouldering or sport/traditional climbing). (A quick definition: bouldering is climbing with no rope and traditional/sport climbing is with a rope.)

Look for this kind of gear at a specialty sporting goods store like REI or on Amazon. To see pictures of what the gear below looks like, click on the link in the name.

Climbing Shoes ($60 - $120) - Don't try to climb in a rock climbing gym wearing just your tennis shoes because you'll get funny looks, be asked to rent climbing shoes, and most importantly, won't be able climb much of anything past V0 or V1 (the rating scale is explained later). Finding the perfect rock climbing shoe for your specific foot type and size is extremely important.

When you go shopping for them be aware of the fact that they are supposed to be a snug fit. They should fit well enough that you don't have much space between your toes and the tip of the shoe, but enough room to move your foot in all possible directions. This is because sometimes you will literally be balancing your entire bodyweight on a single toe as you reach for the next hold.

The sizing is often in European sizes too, so be sure to order the right size. Some great shoes for beginners include the La Sportiva Nago (my first shoes) and the Evolv Defy (my wife's first shoes).

Chalk in a Chalk Bag ($25) - The only other piece of gear you need to get started as a rock climber is some chalk for your hands. As you climb, your hands will start to perspire and you'll easily lose your grip. To combat this, rock climbers carry chalk around their waist. This chalk is similar to the chalk used by gymnasts and it is stored in a chalk bag. This is the chalk bag and chalk that I use.

You have two options for what kind of chalk to put in the bag. You can either use loose chalk or a ball of chalk. I prefer to use a ball of chalk in a second little baggy so that it doesn't fall out of my chalk bag and spill all over. Some gyms actually don't allow the use of loose chalk for this very reason. As you climb, this will become a personal preference.

Crash Pad (~$150) - This is basically just a big piece of thick foam that you lay down on the ground under where you are climbing. You may come down on it when you fall climbing and land on your back, feet, or however. It keeps you from getting seriously injured. When you are walking to where you are climbing you wear it on your back. Here is a crash pad that I have used in the past.

A Friend (Free) - When you boulder outside it is best to go with a friend for a few reasons. They can spot you, teach you, and take care of you if you end up injuring yourself. Climbing alone is not a very smart thing to do (unless you enjoy being stuck under a rock for 127 hours and cutting off your own arm).

Harness ($50) - It is what you clip all of your gear to and run the rope through. You wear this over the outside of your pants/shorts and make sure it is a comfortable, but snug fit like your shoes. I use the Black Diamond Momentum.

Climbing Rope (~$150) - The rope is one of the most expensive pieces of gear, but is also extremely important. Climbing ropes are long, are made to stretch, and should always be kept in a bag when not in use. They are the main thing keeping you from falling and breaking your back, head, leg, arm, face, etc.

Belay Device ($20) - You hook this to the front of your harness and run the rope though it to belay for someone else actually climbing. It takes two to tango and two to trad climb.

Quick Draws ($15 each, $70 for a set) - These look like two carabiners with a small attachment in between them. When the first person lead climbs to set up the rope on the route, they will clip these along the route. The rope is then run through these to until the top rope is set.

Top Rope Set-up (uses 2 Quick Draws) - You place this at the top of the route by either having someone climb up the route directly or hiking up and around an easier route by foot. The rope is run through this and is your main support.

Cams ($250 for a set of 5) - Advanced climbers use these to climb on routes that don't have pegs drilled into the walls to run the rope through. They carry various sizes of these and stick cams into small cracks or crevices along the route.

A Friend (Free) - Never climb alone. You'll need someone to belay for you anyway.

Whether you are in a rock climbing gym or climbing outdoors on actual rock formations you'll want to know how hard the climb your attempting to do is going to be. Lucky for you there are rating systems used by rock climbers around the world for this. For this article I am going to talk about the two systems used most in the United States: the V scale & the "5 point" scale, but here is a list of all of the ones worldwide.

Bouldering (which uses no rope or other gear) has a scale starting at V0 (zero being the easiest) and going up to V16 and beyond for routes that only the top professionals can complete.

The easier the route, the lower the number it is categorized with. Easier routes will be filled with easier holds for your hands, flat platforms for your feet, and shorter distances between holds. The harder routes will have holds that look like no human being could ever hang off of.

Starting around 5.5, rock climbing also uses a scale that goes up to 5.15 and beyond for pro climbers. The easiest being 5.5 and the hardest being 5.15 and up. Letters are also use in this rating system. For example, a 5.8a is easier than a 5.8b. For a full table of the scales, check out this table. 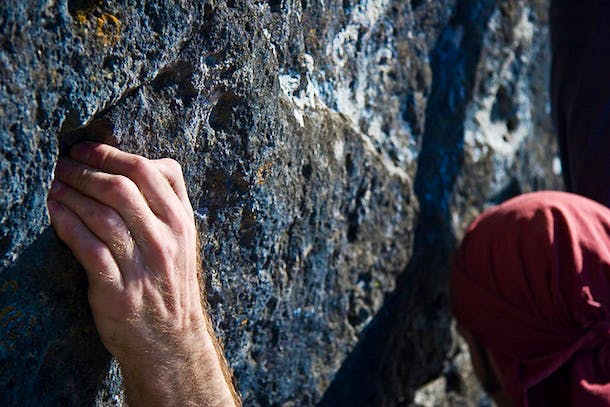 Hold - a place to grab with your hand to pull yourself up higher.

Free - you are wearing no gear (other than shoes) to climb up something. In a sentence, "Did you just see that guy free climb that route?" This is extremely dangerous, but also pretty bad ass.

Belay - shown above in the gear section, it is a kind of carabiner that you run the climbing rope through on your harness. "To belay" also means to be on the ground running the climbing rope for someone on the wall.

Mantling - this is when you use your knee or shin to push yourself up to the next hold. Just like a child climbing onto a couch, knee first.

Bouldering - climbing at lower heights, using no rope, and usually with a crash pad underneath.

Lead Climb - to climb up a route first and set all of the guides of the climbing rope and then set the top rope at the end of the route.

First Ascent - being the first one EVER to make it up a specific route.

Venga! - the equivalent of "come on!" in Spanish, picked up from Chris Sharma's time climbing in Spain.

(If you are reading this in an email or RSS, you can view the video here.)

How Not to Die While Rock Climbing

Always have a spotter. They can: Always use a crash pad when bouldering, especially outdoors.

Use your legs more than your arms. Your arms (specifically your forearms) will tire easily, especially in the beginning. Try to use your legs to propel yourself up the wall whenever possible.

Learn the correct knots to use on your ropes as well as how to properly run the ropes through belays and the other climbing supports.

The Who's Who of Rock Climbers

Chris Sharma - Considered the Michael Jordan of rock climbing, he has continually pushed the sport to the next level. He won the bouldering nationals at age 14 and climbs more difficult routes every year that force the rating scale to continually rise and rise. He travels the world full-time to climb on rocks. Your inner 6-year-old self should be jealous. This video is of him climbing a 5.14a a few years back.

Dave Graham - Considered to be one of the elite rock climbers, Dave is well known for how many first ascents he has done. He also writes a pro blog over on Climbing.com.

Alex Honnold - This guy free-climbs (remember, that is without a rope) to heights that are ridiculously un-safe. One example is the six-hour climb to 2,900 meters off the ground on the Nose of El Capitan, a route that usually takes multiple days to finish. He has guts. Check out some video of him free climbing on National Geographic or on Nerve Rush.

RockClimbing.com - An ultimate resource includes a ton information on routes, gear, and has lively forums.

Dead Point Magazine - A free print magazine and website devoted to rock climbing and bouldering. (Thank you to Nick Tort in the comments for this suggestion.)

Dosage I - V - Dosage is a a series of five documentary type films showing the world's best climbers climbing the hardest existing routes.

Reel Rock Film Tours - Each year this tour goes around the country showing the latest films made about all kinds of climbing. I've gone before and it was great. You can meet other local climbers there too.

Top 15 Rock Climbs - To see what only the pros can even attempt, check out some of the most beautiful rock climbing locations around the world.

Gym Finder - The only way to learn is to practice, so go find a gym and go climb!

Have you ever been rock climbing? If so, did you enjoy it? If not, what are you waiting for!