17 years ago, as a teenager in my parents' basement, I was watching late-night TV. A commercial came on in the wee hours of the morning showing an elderly white-haired gentleman walking along a bridge. He was approached from both sides and was attacked by ninjas.

I awoke the next morning to ask my Mother to take me to that Kung-Fu school and there I stayed for over eight years. After my time there, I moved my practice to Wing Chun, to which I still enjoy to this day.

As I learned over the years, Traditional Martial Arts can often approach combat a little backwards to their Western counterparts. However, I started working with a three-tier approach to rectify this problem. Herein, I will show three easy steps to take your Wing Chun to a level of mastery. 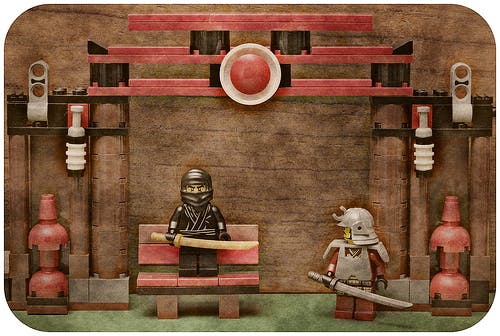 Wing Chun is said to be a stripped-down approach to fighting, but it's still a Kung-Fu system. There are over 30 hand and leg techniques in the system. While Wing Chun is a principle-based approach where most of the hand and foot positions are following the same train of thought, each one requires a different stimulus. In other words, the attacker has to be providing the defender with a certain attack and both attacker and defender need to be in specific positions for each technique to work.

Let's take a lesson from boxing. What do we have for techniques?

What do we have for defense? Looking at this simplified list is a real eye-opener: only four hand techniques to master and a few defenses. How long until you can get in the ring and strut your stuff? If you show up and put in some serious work 3-5 times per week, it can take about a year.

Looking back to a 'simplified' system such as Wing Chun, you can see why it might take a lifetime to master. The key is to find the 'go-to' techniques. What works for one person will not work for another - and that's okay. Personality dictates what people feel most comfortable with.

Look at your own practice. What do you see popping out all the time? What do you see that works at various ranges such as 'boxing range,' 'trapping range,' and 'clinch?' Save the most important element - the punch, and take three or four of your favourite techniques and train them until you're blue in the face.

Solo training is very important. The most important element of this is hitting a heavy bag. Wing Chun practice tends to either strike to the chest or slap to the face. Releasing your inner beast on a heavy bag not only does wonders for cardio but lets a Wing Chun practitioner unleash their strikes at full force.

Striking the heavy bag will clear up any misconceptions of how to hold a fist. Throwing a centreline punch at the wrong angle will give immediate feedback - usually with a lot of pain through the wrist.

The best thing to practice on the heavy bag is punching because the only way to get good at it is to throw lots of them. Throw centreline punches (and various other punches) at different angles and different ranges. The same goes for Wing Chun kicks.

To practice your favourite 'go-to' techniques, you'll need a partner and that's what we'll cover next.

The ancients of Kung-Fu, in general, devised unique ways of training their systems. Forms, two-man forms and push-hands are ways to ingrain the good habits and theory of an approach. Wing Chun, of course, is well known for its Chi Sao, or 'Sticking Hands.' Sticking hands can be played all sorts of ways, but it is not where one should spend all their time.

As said before, watch for the favorites to keep coming up in the Chi Sao. Now is the time to pressure test them. Wear appropriate gear such as mouth guards, headgear, gloves and a cup. Gear is important, not only for protection, but so that both participants can use more force. Time spent playing Sticking Hands does not bring in all the necessary stressors that appear in a fight. When it is time to bridge the gap between Sticking Hands and taking a punch from someone hell-bent on hurting you (training partner or not), technique breaks down due to fear.

There are two ways to go about sparring:

Drill sparring is where your training partner throws single attacks, say only a jab, and you defend with one of your 'go-to' techniques. Work the different ranges, especially the dreaded 'boxing range' that most practitioners have problems with. Notice how your footwork needs to be lively and will get you where you need to be.

Free sparring can be played at different intensities. It's not important to go all-out all the time because there is a possibility that nobody is learning anything. All-out sparring is important however, to bridge those fear and reality gaps.

It's important for Wing Chun practitioners to realize that there are still too many pieces of the puzzle, even though we are taught that our system is simple and efficient. Boxers take years to master only a few punches and defenses.

Looking back over the years of Wing Chun instructors, there are many people who mastered only a few ideas and made it work for them. Watch for common threads in their lineages and you'll be able to pick it out.

And that's the final point: be as good as YOU can be and make it a personal expression of your own.