How to Make a Martini James Bond Would Be Proud Of 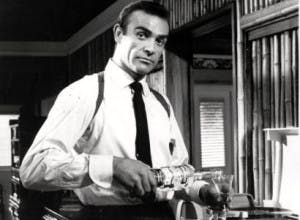 James Bond has been ordering martinis using his famous catchphrase since 1964 in the film Goldfinger.

The phrase is well known, but do you know why Bond prefers his martinis shaken?

You might know the martini by it's current popular vodka-based version, but the original martini used gin as it's base. Some purists still insist a true martini includes only gin and vermouth, and simply call the vodka-based version a vodka martini.

No one knows exactly where the martini was invented. A couple of different accounts point to an origin in or around San Francisco in the late 1800s.

Perhaps the most frequently cited theory is that Jerry Thomas, a famous and influential 19th century bartender, invented the drink at the Occidental Hotel in San Francisco, sometime in the late 1850's or early 1860's. As the story goes, a prospector, about to set out on a journey to Martinez, California, put a gold nugget on the bar and asked Thomas to mix him up something special. Thomas produced a drink containing Old Tom gin, vermouth, bitters, and Maraschino, and dubbed it the "Martinez," in honor of the customer's impending journey. -The Martini FAQ

That version of the martini including Old Tom gin (a sweeter version of gin) and Maraschino would have tasted much different than the common simple dry martini recipes that followed and are still popular today.

It's unclear when vodka was first used in place of gin in a martini, but James Bond clearly preferred vodka over gin (Russian or Polish), whenever available (although he certainly did drink gin martinis as well).

If you simply order a martini today, the bartender will do one of three things: a) bring you a gin martini (he's a purist), b) bring you a vodka martini (he's a modernist, or not a well educated mixologist) or c) ask what you prefer (probably the smart option, given the modern martini drinker's preference for vodka).

Why Shaken Instead of Stirred?

When a cocktail is shaken instead of stirred, it does a few things. First, it introduces more air into the cocktail (known as "bruising" the drink), which may make it taste sharper. Second, shaking a cocktail will dissolve more of the ice (given equal time and fairly vigorous shaking) and water down the drink, which may or may not be a good thing, depending on your preference.

The last thing shaking a drink will do is make it colder (again, given equal time shaking vs. stirring). Most vodka martini drinkers agree that a key to a great vodka martini is that it is served as cold as possible.

That may have been why Bond preferred his iconic drinks shaken.

Another theory is that vodka in the 1960s was primarily made from potatoes, and that those older vodkas had an oily texture that could be reduced by shaking the cocktail.

The real truth about Bond's preference is unknown as it wasn't fully explained in the books.

It is interesting to note that staff from The Straight Dope were unanimously able to tell the difference between a shaken and stirred gin martini in a very unscientific test. It appears that the methods do make a difference, and James Bond wasn't just being pretentious.

The Recipe for a Perfect Martini

Bond doesn't specify the recipe for his ideal martini, so we'll have to speculate a little. He does give directions on how to make a drink known as a "vesper" in Casino Royale:

Three measures of Gordon's, one of vodka, half a measure of Kina Lillet. Shake it very well until it's ice-cold, then add a large thin slice of lemon peel. Got it?

Given 007s preference here for shaking and lemon peel, this classic martini recipe would probably make him proud:

That's it, nothing else goes in a martini. But with a martini, the ingredients only tell part of the story. Your methods are even more critical to making the perfect martini.

Step 1: Chill everything. Keep the vodka refrigerated. Have plenty of ice on hand. You want to serve this drink very cold.

Step 2: Use a modest sized martini glass (not the comically sized glasses from the nearest chain restaurant, just something classy).

Step 3: Put a few cubes of ice in the glass and cover them with either water or vermouth. If you like more vermouth in your martini, you can mix some directly with the vodka in your cocktail shaker. If you just want a hint of vermouth, pour a couple of ounces over the ice to chill the glass and you'll dump that out and leave just a faint taste of vermouth left in the glass.

Step 4: Add three or four ice cubes for each martini you're making into your cocktail shaker (preferably a metal one since you'll be shaking this vigorously). Add 3 ounces of vodka for each martini over the ice. Put the cap on and start shaking for about 30 seconds.

Step 5: Put the shaker aside for now and prepare your lemon peels. There's an art to this, and it works best with a little bar tool.

Step 6: Shake the cocktail again for another 30 seconds or so. One of the keys to a good martini is to let it sit long enough to let the ice dissolve. You'll get a feel for this over time. If your martini tastes too "boozy," it means you didn't let it sit long enough or that you might want a touch more vermouth in it.

Other recipes for a perfect martini you might enjoy: